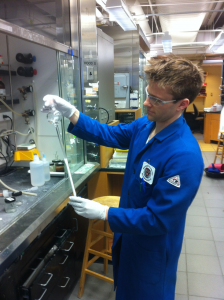 Ian received his BS from the University of California at Berkeley under the tutelage of Dirk Trauner, and in 2006 joined the laboratory of Phil Baran at the Scripps Research Institute as an NSF Predoctoral Fellow. During his graduate studies he developed fully synthetic routes to pyrrole-imidazole alkaloids, including palau’amine. In 2011 he moved to Harvard, where he worked on the synthesis of novel macrolide antibiotics as an NIH postdoctoral fellow in the laboratory of Andy Myers. Outside of the lab, he spends his time biking, running, climbing, and even occasionally appearing as an amateur DJ.

stay up to date on our most recent publications

see how you can apply to the Seiple group